As reported last Friday, the first direct election of the president of the Czech Republic might be delayed. On Friday, Klara Samkova, a lawyer who had failed to collect the 50,000 signatures to start in the elections but had filed her candidacy anyway, announced that she would petition the Czech Constitutional Court to declare the law on the direct presidential elections unconstitutional. She did not give any specific (legal) reasons for her decision, yet her move itself threatens to delay the presidential election set for 11./12. January 2013. With the constitutionality of the law being questioned and less than two months left to the date of the election, the Constitutional Court would have the power to suspend the law or temporarily delay the elections until all problems have been considered (and possibly solved).

Since then, however, a new layer of complication has been added to the whole situation and further failed candidates have announced legal proceedings – but this time against the ministry of the interior and in front of the Supreme Court. Apart from Samkova, three other candidates had been barred from competing in the election as they did not fulfill the 50 000 signature requirement. However, in these cases candidates submitted more than 50 000 signatures but the interior ministry declared several thousands of them invalid so that in the end candidates had less than the required number of signatures. This concerns the candidacies of former deputy prime minister Vladimira Dlouhy, senator Tomi Okamura and former MEP Jana Bobosikova.

To give an example:

If we take the sum instead of the mean of the percentages of invalid signatures as the Czech interior ministry did, we get the following calculation:

An official of the interior ministry defended their practice by stating the law explicitly talks about the sum; actually the law reads ‘from the total sum citizens who have signed the petition [to support a candidate’s start in the elections] the percentage of signatories who represent the number of invalid votes in both control samples is subtracted’. While this formulation might be misunderstood in the first instance, a joke published on Bobosikova’s website shows that with a little thought and a less than elementary understanding of math it becomes clear how the process should work: ‘What kind of cheese do you have at home if you have bought cheese with 40% fat and cheese with 30% fat? Cheese with 70% fat!’.

It is thus unlikely that the Supreme Court will uphold the ministry’s decision. Most likely it will order a re-count of signatures but this, too, could delay the election – especially if one of the candidates fails to meet the requirement by only a few hundred votes and subsequently challenges the outcome of the re-count. Given that according to the current (=wrong) calculations of the interior ministry Bobosikova collected ca. 45,000 valid signatures, Dlouhy 39,000, and Okamura 36,000, this case is very likely.

Nevertheless, neither of the three candidates in likely to win the election or get into the second round. As both front-runners only are currently predicted to receive less than 25% each the combined 16.7% of Bobosikova, Dlouhy and Okamura would not even be able to help muster the required 50% majority for one of the leading candidates (not to mention that they would not unequivocally support one of the candidates). 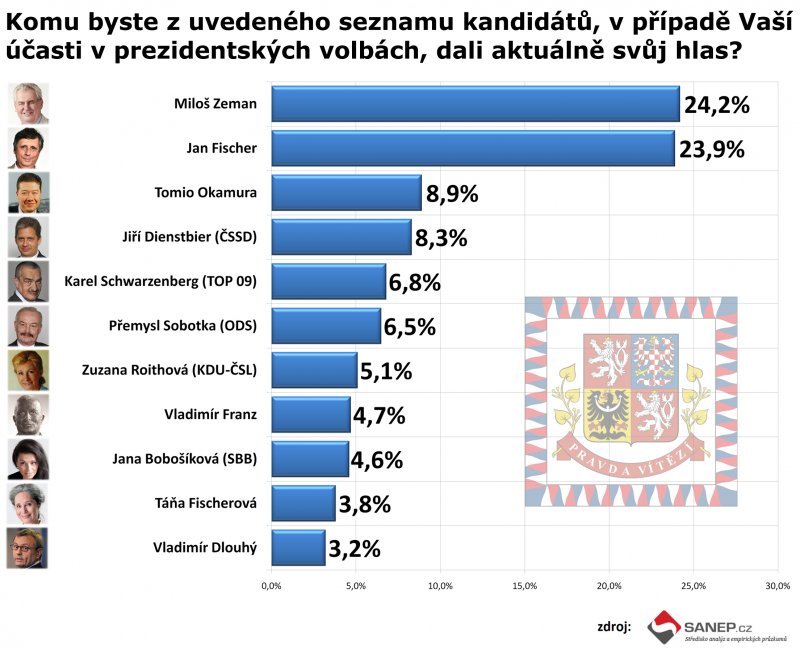