In the recent Czech presidential election – the first direct election of the head of state in the country’s history – it was reported that Czechs abroad predominantly voted for foreign minister and runner-up Karel Schwarzenberg instead of voting for the eventual winner, Milos Zeman. However, visualisations of this difference have been rather crude and concerned only the second round of elections on 25-26 January. For this blog post I have therefore re-worked the data from the Czech Electoral Commission website and created some new diagrams showing the patterns of this difference. In the end of this article I also provide a tentative explanation for why these differences exist. 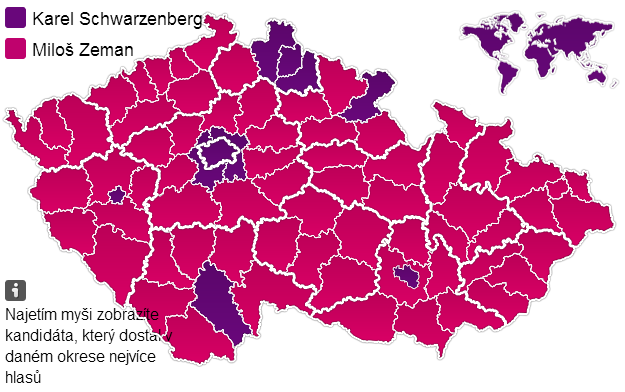 Results of the second round of the Czech presidential elections, 25-26 January 2013 – Map from Eric Maurice (@er1cmau) Editor in chief of Presseurop.eu